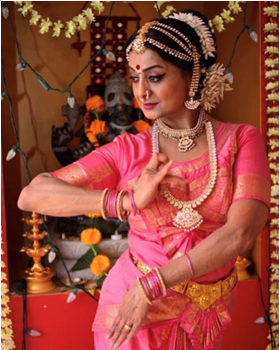 Smt. Aparna Sathe, Artistic Director of NrityaMala School of Dance, specializes in the beautiful and graceful form of Kuchipudi dance form and has dedicated herself to this divine art form for past 20 years. Aparna received her initial Kuchipudi training under the guidance of Guru Smt. Lakshmi Babu and completed her Rangapravesam in 2006. Later, Aparna blossomed as an exceptional dancer by learning advanced techniques and choreographies from the legendary gurus, Padmashree Dr. Sobha Naidu and Padmabhusans Dr. Raja and Radha Reddy. Aparna has performed extensively in US and India for various associations and charitable organizations. In 2017, Aparna has completed her Diploma course in Kuchipudi Dance followed by Masters program in Kuchipudi Dance in 2020 from the University of Silicon Andhra. Since 2018, under the able guidance from Aparna, over 15 students have completed their Level 1 and Level 2 Kuchipudi Certifications by Sampada, University of Silicon Andhra. So far, Aparna has coached 5 students.

NrityaMala School of Dance, established in 2007, has become a thriving dance school in Olney Maryland where Aparna has taught several students in the last 14 years. Over the years, NrityaMala dance school has grown into a renowned and established school that guides its students from their first steps in Kuchipudi to their Rangapravesam and beyond. Aparna has earned a reputation as an exceptional teacher with an exemplary dedication to her students. She is also known for her notable choreographies in Kuchipudi dance style, including Mahadev Shiva Shambho, few thillanas, and some creative abhinaya pieces. Aparna focuses on individual growth of her students and unlocks their full potential while motivating and inspiring them to be great dancers.

Aparna has learned Carnatic vocal music from Guru Smt. Nalini Umashankar and has produced a CD of Kuchipudi songs for her students. Aparna also continues to learn Hindustani vocal music from Guru Dr. Pradeep Sathe. Aparna has had the privilege of being invited as a judge in several Indian classical and folk dance competitions. Aparna is a Guinness record holder for having participated in the largest Kuchipudi dance in the first International Kuchipudi Convention in 2009. In addition to a strong Kuchipudi dance career, Aparna also balances her remarkable professional career in United Healthcare as a Vice President of Center of Process Excellence. She was recently nominated for the prestigious Women in Leadership Award amongst many other recognitions at UHC