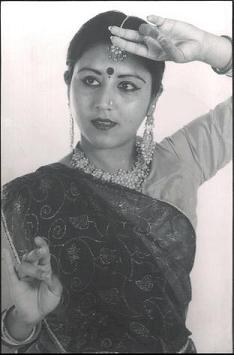 Tina learned Kathak from Rajendra Gangani, son of famed dancer Kundanlal Gangani and head of the Jaipur Gharana, now based in Kathak Kendra, Delhi. Prior to this, her e arly years of learning were with Shashi Sankhla, herself a former student of Kundanlal Gangani, at Kathak Kendra in Jaipur. Tina Sharma received her Masters degree in K athak (Nipun) from Bhatkhande University, Lucknow, in 1993. From that time until 2005, she taught Kathak at the India School, Bethesda (in the Washington D.C. area). Be fore settling in the U.S., she taught Kathak at Banasthali University, Rajasthan, from 1990 to 1992. Tina also teaches Rajasthani folk dances such as Ghumar or Tera Taa li. In addition to Indian Classical Dance, she is also a licensed Physical Therapist practicising in Virginia.

Tina is the Director of her own dance school, Tinas Dance and Music Academy in Springfield, VA. She has performed at var ious venues in the Washington, D.C. area.